The history of Crete

Out in the dark blue sea there lies an island called Crete, a rich and lovely land, washed by the waves on every side, densely peopled and boasting ninety cities.

Crete had the first European civilization over 4000 years ago with the Minoans. Once this civilization came to an end around 1400 BC. Why is still not clear and theories abound.

From then on, Crete was invaded by all the neighbours, starting with the Mycenean, then the Dorians and later the Romans. The fall of the Roman Empire put Crete under the rule of the Byzantine Empire and Christianity was further established.
The Arabs invded and conquered Crete in the 8th - 9th century, it was taken back by Byzance and eventually sold to the Venetians in the early 13th century. The rule of the Venetians prevailed until 1669 when the island surrendered to the Turks. Turkish rule lasted until 1898 when Crete was placed under international administration. In 1913, Crete was officially attached to Greece.

This amazingly rich history is well beyond the scope of this web site but there are a few informative links listed below.

Images of the palace of Knossos

The Romans in Crete

The Orthodox church in Crete - a brief historical review 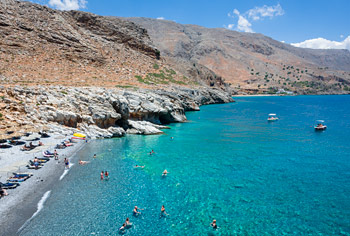