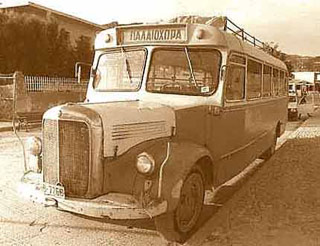 Greece has a national bus service called KTEL. This runs on Crete as well and it is cheap, safe and reasonably punctual.

KTEL in West and Central Crete has its own web site where you can download current time-tables..
The phone numbers are 2831022212 for Rethymnon, 2810 221765 for Heraklion and 2821093052 for Chania. Don't assume that they will speak English well or at all. They will also reply to emails enquiries and will do so in English.
There will be far fewer buses to tourist destinations shown in winter than there are in the summer months. It is not possible to check summer time-tables at other times so you'll need to go back to the site closer to the time at which you want to travel.

As a rule, there are a number of buses per day between the main cities and at least two a day to even the smallest villages, if only to take children to and from school.

It is possible but never necessary to pre-book bus tickets. Note that seat numbers might exist on the tickets of some routes but are generally ignored by the locals. Just sit where there is space and all will be well.

The buses are in good mechanical condition. They are not as old as the one in the picture but not necessarily the latest models either. All buses have air-conditioning. The drivers are safe and competent and accidents are extremely rare. It is far safer to take the bus than drive a car.